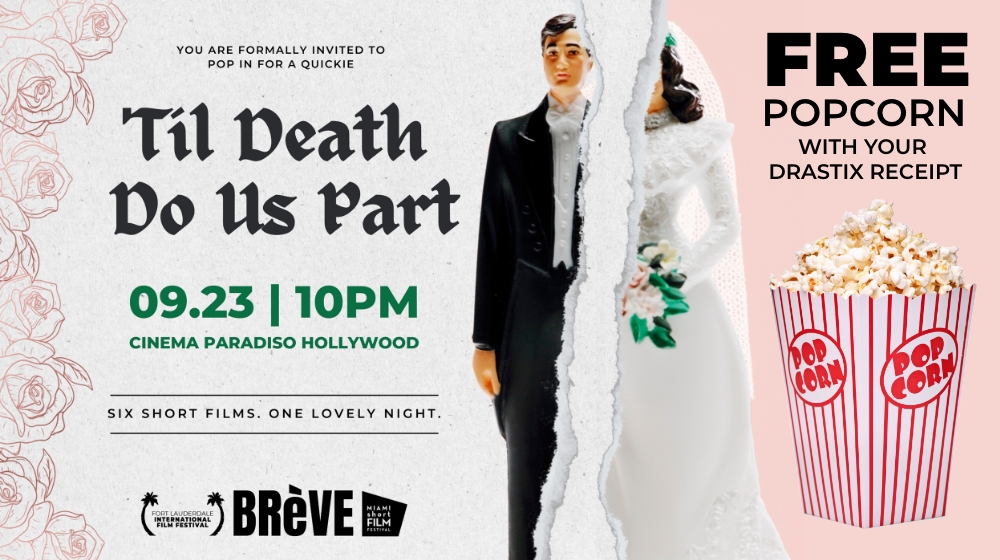 Bring your movie ticket receipt for Breve to Drastix and receive a FREE Dessert with any purchase AND show your Drastix receipt at Cinema Paradiso for a FREE Popcorn.

“Till death do us part & not a moment sooner!”
Friday Sep 23rd

TEN YEARS – Dir: Ryan Firpo – Narrative – 14:11 - USA
A middle-aged married couple on vacation in Las Vegas for their ten year anniversary have a sobering conversation about marriage and monogamy.

FOOD FIRST – Dir: Pol Ponsarnau – Narrative – 10:52 – GERMANY
Food first, then morals! A comedy about two couples in a stylish Berlin tapas restaurant. Tension grows with each dish. All seems lost when the question “who waters your plants?” comes on the table.

BERNIE AND REBECCA – Dir: Melissa Kent – Narrative – 14:55 - USA
A blind date turns into the experience of a lifetime.

DIVORCE: THE GREATEST HITS – Dir. Michael Medico – Narrative – 15:42 – USA
Karen's marriage should have ended years ago. When she finally gets the courage to talk to her husband about making their marriage work again, things go from bad to worse. And divorce is just the beginning...